TRIPLETS plus ONE
Uncategorized August 5, 2008 admin

I was checking my emails just now and as usual early of the week I’ll get a news feed from the Touch Rugby team on their weekends Touch; their progress, who scored the most for the week, who get injured, names of new comers, their future plans and yada yada yada yada.
It’s been a while since I last joined them and sadly missing lots and lots of tournaments including some international tournaments. From the e-mails that I’ve been reading, seems that they are really trying hard to make some major improvement for Touch Rugby in the country to the extend that they been in touch with various regional bodies as well as the Ministry of Sport in Malaysia.

I really hope that soon I’ll be able to get down to the field and do some running. Hoping that I’m not that rusty (after soooo long not playing) and at least still be able to catch the ball. Oh, I picture in my head that soon hArith and athirAh can walk and they would follow me along to the field. Running around, getting themselves dirty…playing with the mud, kicking some balls while being look on by pApa who is carrying uZair in his arms. Oh what a bliss.

Hmm, when could that happen? Oh didn’t I just say about not having enough sleep? So would that ever be possible?

Found this in my photo collection… 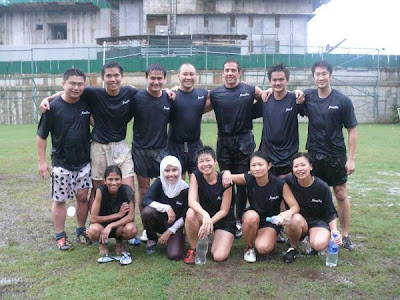 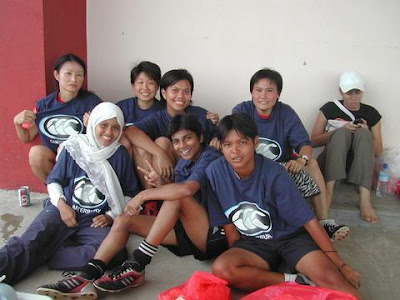 Can’t remember what tournament was this, but I do remember that we were being sponsored by Canterburry =)