Coming to an End… – TRIPLETS plus ONE
Uncategorized

Coming to an End…

September 29, 2008 admin
Just a day left before Ramadhan comes to an end. Part of me feels guilty and another half of me feel proud. Yes, I feel very guilty for being less religious this time, there are number of daysss I skipped my terawih (which automatically makes me skipped my solat tahajud, hajat etc.) and I hardly read Quran. In previous years I always took the opportunity to khatam in this holly month, but this year around…I can actually recall the numbers of pages I read (yes, shame on me!).
I mentioned this to my friend on the matter that I skipped doing my terawih (at home) and didn’t have the chance to go terawih at the mosque. And she replied with a very comforting answer “takpe ummi kate, jage anak pun pahala”. Yes, basically the reason I ‘neglect’ my religious duty due to time constraint. Previously after every solat I would have ample time to read the Quran, now nak solat pun kelam kabut, apatah lagi waktu tuk baca Quran. And since pApa at times won’t be at home, leaving me 3 babies to put to sleep, I’m quite used to sleeping early. The moment I managed to put all three to sleep, I will also hit the bed fearing that at anytime one of them will wake up. Thus whatever amount of time I have to sleep, I’ll make full use of it. And since my body is conditioned to such routine, even when pApa is around I tend to sleep early. (which explains the neglecting of my terawih prayer)
But the other half of me feel proud. Proud that I’m able to fast and need not make used of the rukhsah Allah gave. Despite breastfeeding and having to chase the two lil’ rascal, al-hamdulillah I’m able to stand the thirst and continue with my fast. After every feeding session, I would feel thirsty, but if I can run around the field during fasting month from morning till evening for a touch rugby tournament, why can’t I do it this time? Just running around the house without the ray of the sun. So I ignored the thirst and continued the day like any other days. And I also feel hAppy. hAppy that my milk supply is enough to feed uZAir. =)
This year, we will all be here in Kuala Lumpur. Raya-ing in the city. So we will be witnessing the deserted city of Kuala Lumpur since majority folks will be in their hometown. Those going back to hometown, have a safe journey home and have a joyous celebration!
On behalf of the family, hArith would like to wish all of you…. 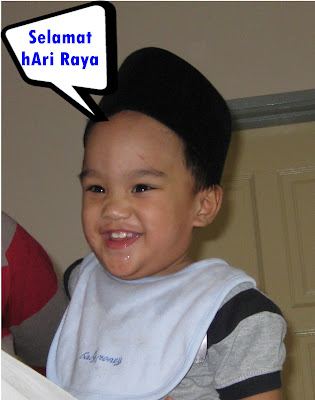