Dream Big – TRIPLETS plus ONE
Uncategorized

Yesterday, I was having an intellectual discourse with my brother and we were talking bout a particular hadith. He further explained that Allah would give us from what we expect from Him. To simplify things, he mentioned to me…”from what you wish to have in life when you were in secondary school….I’m sure most of it u already have by now.” To this I sat and ponder of how true what he had said. Yes, I think I almost had it all. The number 1 that I had always wanted was my ambition; TO BE A HOUSEWIFE. Back in school days we always had to fill up our ambition in a form..we had to list down 3, and I always wanted to write HOUSEWIFE, but I fear the teachers would say I’m not ambitious, so I remembered writing just like what others wrote…among those are accountants, architect, doctor and bla bla bla (yeah, it changes every year, depending on what my friend around me wrote…hahhahah) But the truth was, I told myself I wanna get a degree in psychology and stay home with my kids, with hope that what I learned would be beneficial for me in raising my wonderful kids.

Thus after SPM I took up Psychology and that time around I was confident enough to make it known to others that I wanted to be a housewife. All my lecturers knew about it. They never pass comment that I’m not ambitious neither did they look down on me. And now Al-hamdulillah I’m blessed with a wonderful husband which make it possible for us to live without the need of double income, making it possible for me to be a housewife.

On top of that, since young I was blessed with such privilege that allows me to travel every year. I remembered wishing and hoping that such privileges will remain as how it is. Again, Al-hamdulillah I’m married to a man that allows my dream to remain so.

Besides that, I always adore twins…a pair of a girl and a boy to be specific. Each time I came across a pair of twin, I will definitely give them a second glance…well most of the time I ended up giving them third and fourth glance, hihi. And when I was confirmed pregnant, I was told of the wonderful news of having triplets. But Allah decided to take alesYa back with Him after three days. Of cause I was sad but look on the bright side…I now have a pair of a girl and a boy, just like how I always dreamt of. 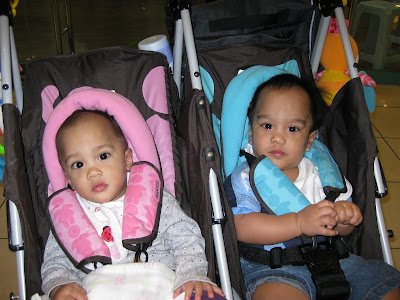 and here’s my very own pair of twins for me to adore at, day n night =) 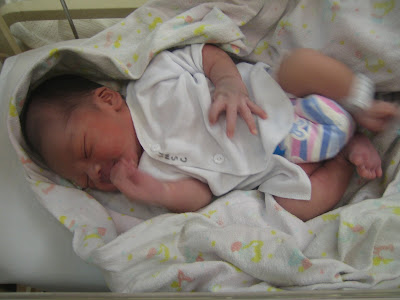 And of coz there are lots of other things in life I wish for and I now have it (of coz one of it was to have a designer bag =) ). And also after the birth of uZAir, we were in search for a bigger car but most of the brand new were beyond our reach, and we were thinking twice bout getting reckon cars. And now the Hyundai Grand Starex is a heaven sent. A brand new car that accommodates great comfort for the whole family. And next year, we will be looking forward to a brand new home, with dreams that Allah will ease us living by ourselves (no longer under my parents roof). Of coz I have lots of thinga running in my head when talking bout our very own roof. 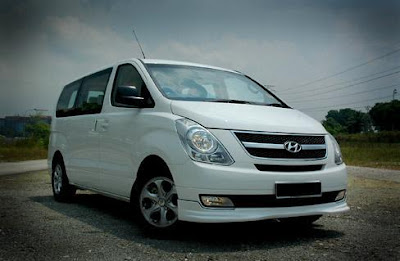 a heaven sent =)
My brother added that, it’s good to dream big. We need to dare to dream big (although some might say jangan suka berangan) but look back into the hadith, as Allah already said that He will give us what we expect from him. For instance, you might say it is just impossible to have one million in your account despite that you work so hard. Oh, it’s okay to dream of having one million, Allah will find a means for that dream to be realized. My friend once said “bumi Allah ni luas, rezeki Allah ade merata-rata”. Allah works in a great way to which we shouldn’t question but to have faith in him. For example….one might have thought that if I wish to continue having the opportunity to travel, I should have work hard to earn lots of money to enable me to travel…but it didn’t work that way. Since I wanted to be a housewife, I won’t be able to work and earn myself (so how can I afford to travel aight?)…thus Allah came out with another way; to marry the man I am now married with…which now allows me to travel like I used to since childhood.
After much pondering, I realize that most of what I dreamt of during school years have been materialize. Obviously during my teenage life, I only look at 10 years ahead. So now that I’m already 26 I should start sitting down and think of my dream and wishes in the years to come… to dream of what I (and the family) want to be until pass retirement age.
I’m also starting to dream what I want for my kids when they grow up and what I want from them. Of coz the number one that I want from them is for them to be responsible enough to take care of us, their parents.
So pApa, if you wish to have a sports car at a certain age…start dreaming of it NOW! =)
And also to others out there…start dreaming! Yes, dream BIG. orait, go get a pen n paper n do ur wish list 😉