Mambobaby – TRIPLETS plus ONE
Uncategorized

Somehow we love trying new “gadget” for the kids. But unfortunately some of it doesn’t fucntion like how it is supposed to be. Well previously we tried one of the Floaties product, the one that they have a float on the front and at the back of the baby (no, nope the life jacket thingy) but it turned out not suitable for the babies. We expected that the baby would be in an upright position. However,upon wearing that thingy, it automatically positioned the baby in a swimming position. Thus the face would actually face down into the water, unless the kid knows how to lift his/her face and start kicking his/her leg then he/she would surely look like a professional swimmer.

But yesterday while I was blog hopping, I came to know bout this product. I straightaway showed En Suami and it was nice that he approved of buying it immediately. So we bought it last night and tried it on today. Wow, it really works. So instead of sitting relaxing using a float (in which the baby would be in a sitting position) this float would encourage them to move their feet more. Well, in a way…it’s a form of exercise. 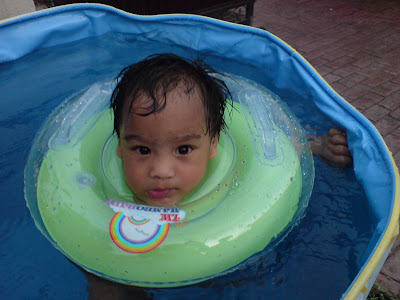 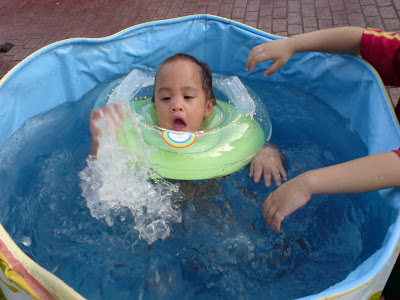 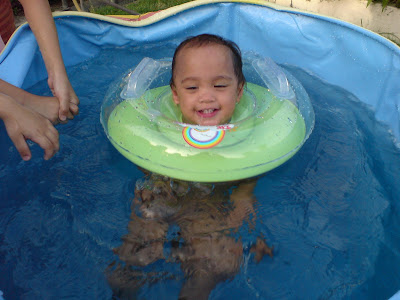 athirAh was busy splashing the water non-stop. I couldn’t take a better shot coz afraid my camera (phone) would get wet. 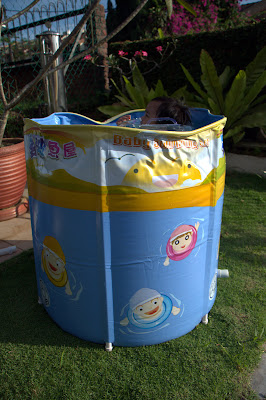 here’s how the tub looks like. It’s not big enough for the two of them to go in together. Thus they didn’t want to be in it for long coz no accompany. Since the thing works, we can now try it out at the swimming pool…yeah they can start splashing at one another =)
*i hv problem uploading the video of them in it. will try again in another post