Delay in Speech? – TRIPLETS plus ONE
Uncategorized

Initially my main intention of having this blog was to share my experience of triplets’ pregnancy; it then continued to share our experience of ups and downs in raising our miracle babies. Their journey and battle to live. Months and months of hospital stay, enough to make us suspend every now and then. Al-hamdulillah they are doing well now. They are almost there catching up with their chronological age.

Now that we are blessed with a full term baby; uZAir, we can see the difference of a full term and premie baby. It was a good thing that the premie came first then uZAir or else we would be so worried of hArith n athirAh’s progress coz we have a benchmark to compare (uZAir)
I’ve been wanting to write up on the difference of premie and full term from what that I have observe so far. When times permit me to do so, I will.

So far, I’m glad that we have taken the action of sending hArith n athirAh to the playgym class. Based on the last check up, their progress in term of physical development is at par. Of cause I can’t say for sure that the playgym helps them but I’m sure in a way or another, it does help. And of coz the toys we bought were being helpful too. Especially the mini climbing frame.
hArith and athirAh started crawling when they were around 9 – 10 months old (corrected age would be 6 – 7 months). And they stared walking when they were 16 – 17 months ( corrected age; 13 – 14 months). That’s consider good progress coz articles I read, there are premie who only started sitting at 14 months. Al-hamdulillah their playgym has helped them with their agility. 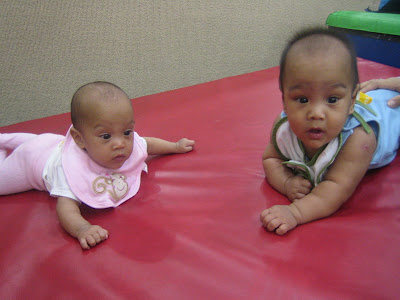 Them when they were 9 months 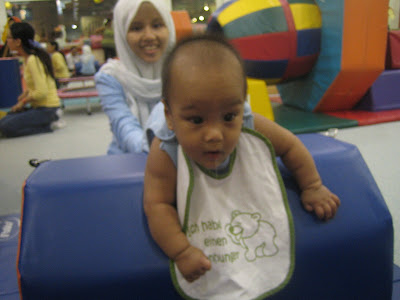 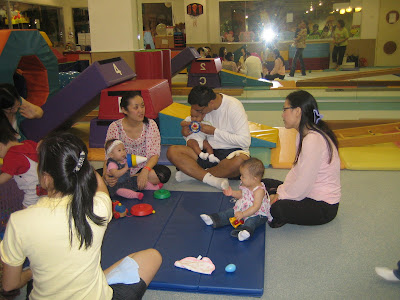 see, others could already sit but hArith n athirAh couldn’t at the time they started the class 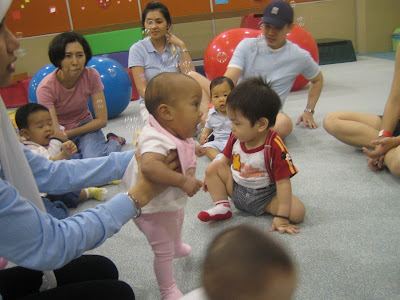 However, my concern now is their speech capability. The few words they can say is pApa, pah, baby and a-ti-yaaahhhh. Lately athirAh been calling out for Dija, she will look out the window towards the neighbours’ hse and say di-jaaaa. im not so sure if that were coincidence or she really means it. Other than that hArith would just point to what he wants. They are now 1 year 8 months…do u consider this as delay in their speech? However they have no problem in understanding instructions. 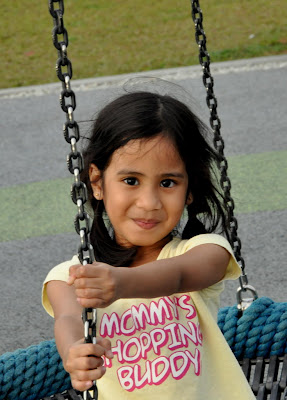 Dija; The Neighbour
I know some premie still cant talk a word at age 3 and some ended up needing to send their children for speech therapy. Yes, no doubt it’s even usual for some full-term baby to talk later but the thing with my kids…they have 2 reason for talking late (based on articles tat I read)
1. Being premature
2. Multiple babies; yes it is said that multiple babies tend to talk later because they can understand between them (baby talk) so they don’t see reason for them to learn to communicate with adults. Coz they already have their companion.
So the question now is, are my kids not talking just because they are among other full term kids who lambat cakap or because of the above two short coming? How do I know?
If it is because of the above two I do think it is important to counter the issue now to enable them to catch up with their chronological age vocabulary. Just like what we did for their physical development. Well, at the moment I have daily ‘playschool’ in my mind. That would allow them to socialize with others, hoping it could help their speech. When I was working in Cosmotot I could really see improvement in those yg ckp pelat nk mampus smpai kena teka2 ape lar budak ni tgh ckp jadi clear, terang n jelas in a month or two. But syauQi thinks there’s nothing to be worried about. I mean they fall under same cam other full term yg happen to cakap lmbat
Oh tapi kenapa fees playschool mostly sume cekik darah! And most of it nk kena bayar by semester, 3 bulan skaligus, not to mentioned starting kena bayar annual fees ah, deposit lah…jenuh lar kami nak bayar lump sum tuk 2 kepala. Ya Allah ya tuhan kami, murah kn lah rezeki kami. Ameen