2 Years Young – TRIPLETS plus ONE
Uncategorized

It’s 8:18am now. 2 years ago…at this particular time, I was on the hospital bed fighting for my babies’ life.

I was already 9cm dilated but doctors were trying to stop me from giving birth as I was only in my 26 weeks gestation, And the main reason they asked me to hold on was because they didn’t have enough ventilator.

And Alhamdulillah, it was their rezeki to be together. 2 premature babies were discharge…thus they have 2 ventilator available. The minute I heard they have enough ventilator. I alarmed the doctor, “dah tak tahan sgt ni…”

Within seconds the room was full. Doctor after doctor came in, and not to mentioned nurses after nurses. I can still remember the scenario and the conversation ” okay, i’ll be here with the ultrasound, monitor babies’ position…u be there, and u here…u do this, u do that…and u standby here”, a doctor was assigning duties.

Nurses were like cheerleaders cheering on the football field. seriously i had more than a dozen of them! “ha..betul tu…lagi lagi lagi lagii” they were full force cheering for me. but i can still remember their faces. their voices and faces were contradicting. i could see their panic faces, i could sense their fear. Yes, i was pushing it right but there were afraird of my babies’ life.

and at 9:11am arwah alesYa zAra was born (564grm) and again with another 6 mins interval athirAh zAhraa (600grm) was born.

However, unlike other mothers…i didnt hear my babies’ cry during labour. it took me almost 3 months to hear hArith’s and athirAh’s cry.

They sure went through alot. 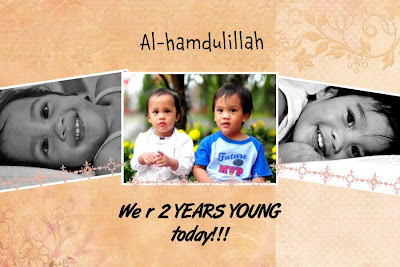 and despite my reason here, there will still be no party

mayb a makan2 at hArith’s skool…