Oh sorry peeps for the hiatus. Was pretty much occupied trying to settle my dot com. (hah, padahal sume mrs imran tlg buatkn, my part cume choose my own template yg smpai skrang rambang lagi berpinau biji mata nk pilih..hihi)
So where do i start now? Should i start from where I stop or start from the latest (Fathers’ Day) and back track?

Err, i think i should start off with the FAthers’ Day celebration…and i shall warn u guys…its a pretty loooonnnggg story. Banyak giler hokey dugaan tuk buat suprise party ni.

Well, Fathers’ Day preparation started off somewhere last week when Jua YM me asking if I was interested to join her together with Lana to do a surprise for the Daddies. I immediately jump into the wagon since at that particular time I had no other plan yet.

So “lied” to En Suami saying that we need to go for a friend’s house warming. And to make it less suspicious, I decided to have Fathers’ Day celebration earlier by one day since my dad wont be around on the 21st. So off we went for lunch on the 20th. And at night we also bought a cake.
Oh before that, on the morning of the 20th…hArith made breakfast for pApa. Yes, hArith was the chef in the kitchen!!! (this was also part of the plan to make it less suspicious bout the party) The idea was to have it celebrated on the 20th so he would have thought that’s the end of Fathers’ Day for him.

*will make a different post of hArith the chef

And after lunch with the family…i had a baby shower to attend. Brought along all the little rascal (will also do a post of this baby shower in another entry)

So on the 21st… I had trouble printing tshirt for the kids. My printer was giving me a hard time since the day before..rase nk hempok je printer and throw it outside the window!! Here’s the thing. We have 2 printers in the house..satu the one that comes with fax machine., officejet That printer can do mirror image setting (I need mirror image for me to do iron on tshirt) BUT that printer cant take the iron on paper…it would get stuck, I guess the paper is too thick. And the other printer is the HP photosmart. It has no problem with the iron on paper BUT it does not have mirror image setting. Or maybe it has, just that im being ignorant. Each time I click on the mirror image setting….it ended up going back to the default setting. Went to few places to get it done but failed in all attempt. Arggghh. I’m supposed to get it done by mahgrib but there I was screaming at my printer at about 4pm. Oh not to mentioned making syauQi annoyed coz I have been disappearing, leaving the kids disturbing him sleeping.

Menggeleupur okay..that’s the only thing im assigned for the surprise party, so it would be ashame if I didnt get it done. Panic Panic!

And suddenly, out of nowhere..a solution pops out from my head… (it took me quite sometime to figure out a solution using the 2 printer I have…y lar i didnt think of it much earlier). And this was what I did. Print it on a normal paper using the printer 1 (has mirror image setting but couldnt take the iron on paper). So with the mirror image picture on the normal paper…i use it to photocopy it using the printer 2 (could take the iron on paper but no mirror image setting). Yup, the printer 2 has the flat top photocopy like features. Lega hokay when I managed to get it done. Rush to get the image iron on the tshirt…and suddenly syauQi came to the ironing area asking what was I doing…alamak, kantoi. Damn!

Nway..here’s the design on the tshirt…5 different design. Luvly made by Jua. (this was another reason I would feel terrible bad if I didnt get the tshirt done…after all the effort by Jua) 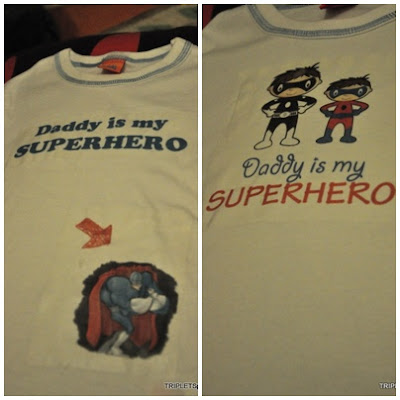 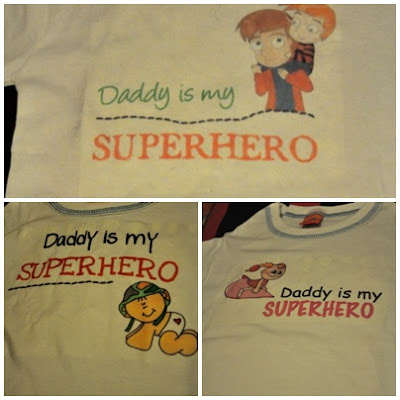 So that night, after maghrib…off we went to Jua’s apartment. Hmm…next was, how to keep the party as a surprise. What do I tell the security. En Suami already knows Jua’s unit. So what do I tell to the pak guard??? I cant be mentioning Jua’s unit…then it would be pretty obvious. Fuh, good thing I have a friend who has a sister that stays in the same condominium. So I made use of her unit number to inform the pak guard upon getting access in.
And, now…my fren’s is at level 5 and Jua is at level 2. How do I get to level 2 instead of level 5? Ape lagi..temberang lah kate nak pass barang to Jua. Made a phone call to Jua…fake a conversation with her saying i’m passing her stuff. In a way that was a signal to Jua that I have arrived. While walking to the lift…saw Jua’s husband and Faris…panic wo takut syauQi suspect. Then Jua played along…invited us to drop by to her place.
As we reached Jua’s unit…i asked syauQi to have a peek inside…to have a look if he sees anything familiar. The word DAD was hanging on the wall..and yes he could recognize the painting of his children. (errr..but he actually mentioned name hArith specifically)
As for the decoration, we get the kids to do the “ I luv DAD”.

Faris was assigned to do “I” 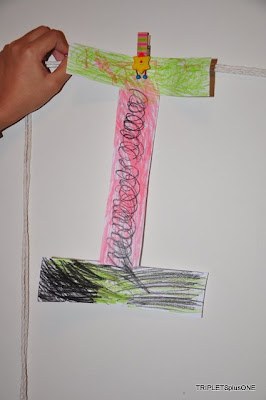 haiQal did the “l0ve” 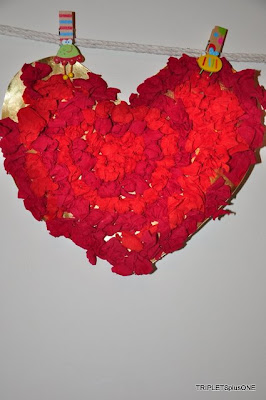 and my kids did a letter each for D.A.D 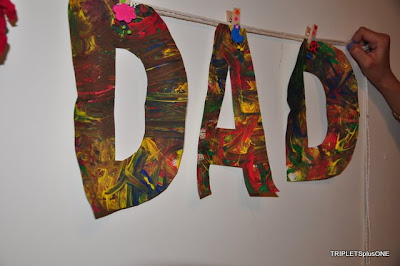 made with luv by the luvly kids =) 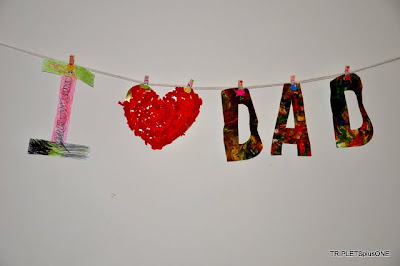 syauQi was a bit confused I think (well he look like one..unless he was good at faking it..hahaha),
told him lets enter the (jua’s) house…
however, he still look confused..i told him, its a surprise Fathers’ Day Celebration…then sempat lagi tanye… “then tingkat 5 tu takde lah?”
“nope..no house warming..the food is for here” I replied. I brought spaghetti in which I told him the housewarming was a pot luck. (fuh…dah brapa byk tipu siut)
Then he asked, selamba kasi unit org lain kt pak guard. Hihi, no worries…i told him whose house it is at level 5.
So there goes the end of hiding the secret from him. It was really difficult I shall say. Dah lar printer buat hal…I was really at a point of telling him about the celebration and made a deal with him to act surprise.
And here’s an attempt to get all kids seated with the t’s on….failed..hahahah 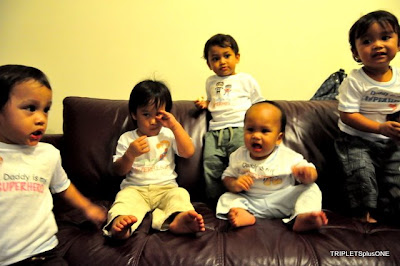 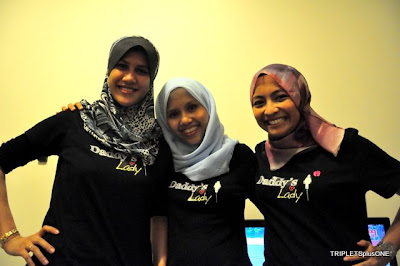 Again, nicely design by Jua
Anyway, here’s one thing about men…org buat surprise buat lar muka tekejut kan..but instead of giving us a surprise face…they all gave the same face :CONFUSED. It was as though saying “ape pulak korang cube buat nie???”
here’s a pics of them when we all came out from the room with our tshirt. But sorry pics abit blur…i guess shaky hands while snapping the camera coz was jumping saying “SURPRISE, HAPPY FATHER’S DAY” 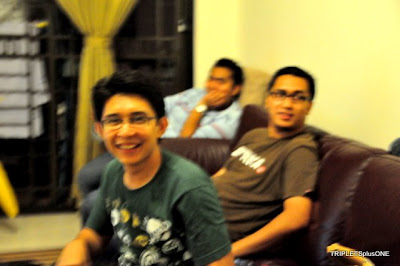 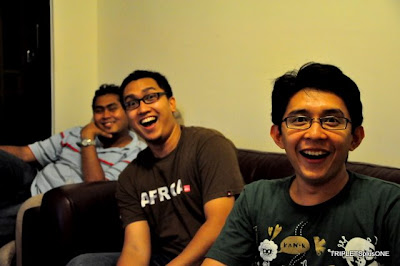 and again, Lana demanded for another shocking face for all the effort kami buat…and as for me for all the tipu helah yg tepaksa i came out with. 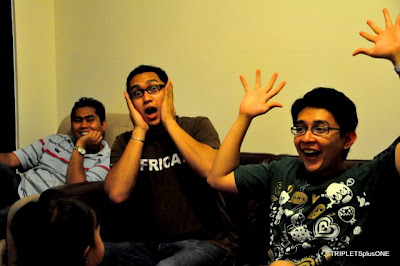 We spend the rest of the nite eating and also had a flash card session…demo by Jua.

And of coz a photo session with the 3 fathers and the kids. 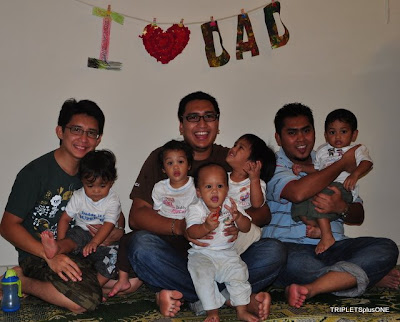 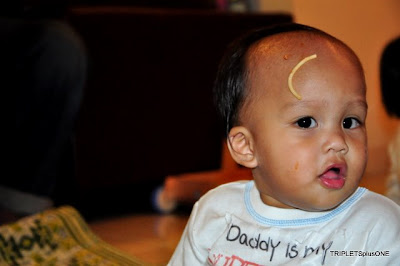 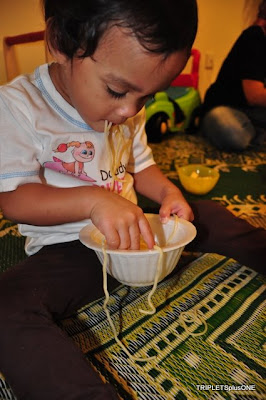 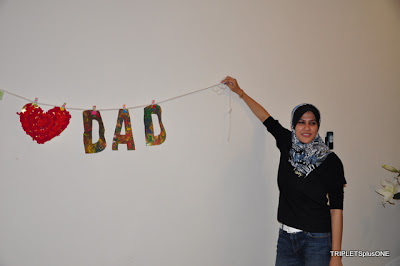 And to all DADs out there HAPPY FATHERS’ DAY!
And to syauQi;
Thanks for everything…yes everything. Working pagi petang siang malam for all of us. For being a great father to my kids. Providing everything for us, waking up at nights to deal with hArith and athirAh, bringing us here and there, each n everyday that you are home with us..and the list goes on. A very big THANK YOU. We LOVE you!
And to Bapak;
Also a BIG THANK YOU to you…it is just impossible to list down the things bapak does for me, coz it is almost everything. Tak caye? Even my undies and bra pun my bapak belikn tau. Hah..sukehati lar korang nk kate I tak malu..but i’m pretty much proud of it coz I think no other father does that for the daughter 😉
* you can also view entry of this celebration at Jua’s blog =)
-ha, panjang tak entry ni…qada’ brapa hari tak tulis2, hihi