Erythema Multiforme and USANA – TRIPLETS plus ONE
Uncategorized

A friend text me sometime back asking about USANA, she’s suffering from a skin problem called erythema multiforme, it is like red patches all over her body and after awhile the reddish slowly darken and ended up it look like scar. She went through various blood test and also skin biopsy. She said she will give USANA a thought first cause of the price factor. I wouldnt want to be pushy so i told her it’s okay, anytime she wish to place an order can just buzz me.

She tried all kind of medication and was desperate for a cure cause she’s getting married in Jun. About a month ago she text me. I explain to her USANA is a cellular nutrition, it is not an overnight healing process as it takes time to heal internally. It does not act like creams where it would make it disappear very fast and also recurrence rate will be rather fast too. She understood me well. She have tried all kind of steroid base cream and just like i said, and the recurrence rate is rather fast. She wanted something permanent.

Since she’s getting married in Jun and wanted something fast, i told her she should use the complete supplement. But at this point, she said price is not an issue coz she’s really desperate for a cure.

Alhamdulillah, she said her skin is improving, takde baru terbit and yg lame is slowly healing. Since she’s a nurse she understood well that it will take sometime for it to heal. But she’s more than happy that no new ones appear. The other day, syauQi met her fiancee and asked about the skin condition. Wahh, the fiancee was very happy, he said now her face looks very radiance.

It is comment for USANA consumer to have very yellowish urine at the early stage of consuming it, this indicates that the body is flushing out all the toxin in the body. This gal said her urine was very yellow for more than 2 weeks, i guess she really have lots of toxin to flush out, MAYBE the toxin choose to exit via her skin. MAYBE

This is how the skin condition look like. And my friend have it not only at her hand, but all over her body. 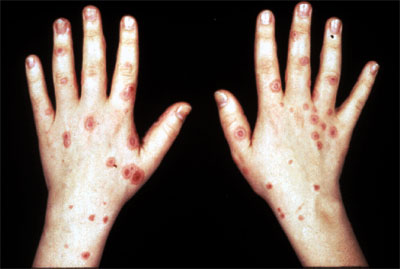